All I Want for Christmas Is You Lyrics & Meaning

All I Want for Christmas Is You Song

Listen to All I Want for Christmas Is You Song with lyrics and read the hidden meaning behind the lyrics written by Mariah Carey.

I don’t want a lot for Christmas
There is just one thing I need, and I
Don’t care about the presents
Underneath the Christmas tree
I don’t need to hang my stocking
There upon the fireplace
Santa Claus won’t make me happy
With a toy on Christmas day

I won’t ask for much this Christmas
I won’t even wish for snow, and I
I just wanna keep on waiting
Underneath the mistletoe

‘Cause I just want you here tonight
Holding on to me so tight
What more can I do
Oh, Baby all I want for Christmas is you

All I want for Christmas is you, baby.

Meaning: The song is a plea from Mariah to spend Christmas with someone they love, wishing for nothing more than their presence. It expresses how they don‘t care about presents or things under the tree, and ultimately just want that person‘s presence above all else to have a truly meaningful holiday.

About: All I Want for Christmas Is You 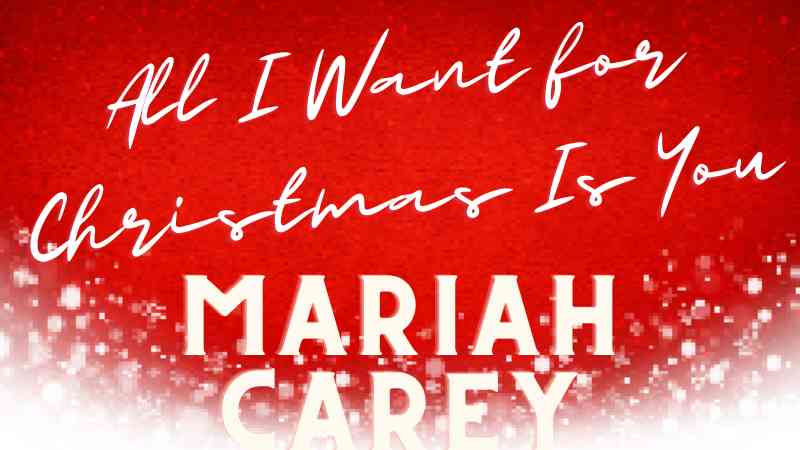 The holiday season has been a popular topic of discussion for many years, but the hit single “All I Want For Christmas Is You” by Mariah Carey continues to be one of the most beloved and successful seasonal songs around. With over 14 million copies sold worldwide, it is not hard to believe that this song is still so relevant even today. But perhaps what sets this tune apart from other festive tunes are its meaningful lyrics and emotive melody – creating an atmosphere of joyous anticipation during wintertime like no other.

The iconic track was penned in 1994 by Mariah Carey and gifted to us on October 29th with its release under Columbia Records as part of her first-ever seasonal record, “Merry Christmas.” Centered around traditional American stylings alongside pop influences and adult contemporary, plus a festive blend of piano, drums, and assertive background vocals – this joyful love song never fails set hearts all aglow.

To many, Mariah Carey’s “All I Want for Christmas Is You” is an annual holiday tradition. It was released as the lead single from her fourth studio album Merry Christmas (1994). As well as making it one of the best-selling singles around, this song has come to represent hope and reassurance that although times may be challenging during winter, no matter what our wish list looks like – love will conquer all. This feel-good message resonates within us each time we hear its liberating chorus: “I don’t want a lot for Christmas / There’s just one thing I need/ And I don’t care about presents underneath the Christmas tree.”

The story behind how ‘All I Want For Christmas’ came together is also quite heartwarming. In 1993 after completing work on her third record, Music Box, which went on to become a commercial success, Mariah wanted something completely different musically speaking. She reached out to composer Walter Afanasieff with whom she had worked on previous projects like Emotions and Music Box. She requested his help to turn her concept into magic, not knowing that their collaboration would make them international stars overnight when releasing “All I Want for Christmas Is You” worldwide a year later.

During the songwriting process for this groundbreaking single, Mariah and Walter traveled to Colorado, where they co-wrote its legendary lyrics in just two days – truly making it one of those rare tunes that have crossed generations without going out of style or losing their power. Lyrically speaking, what sets the song apart from other Christmas songs is how festive yet realistic these messages are. Carey talks about not wanting a lot but more importantly: The title of the song indicates her focus on affirming age-old values, such as happiness comes first no matter what material desires we may strive for and love should take priority over buying expensive presents if our hearts wish only genuine joy.

But even after covering the song’s history and bubbly lyrics, there is still one last aspect of this holiday anthem that needs to be mentioned: its presence in popular culture. Aside from being featured in several films (“Love Actually” starring Hugh Grant and Liam Neeson) as well as adding fuel to countless Christmas-related TV adverts. Mariah’s powerful ballad was also the first song ever by an African American female artist to peak to the No. 1 spot during a full calendar year, proving once again why it has become such a precious gem beyond music circles all around today.

In the United States, “All I Want for Christmas Is You” reached No.1 on Billboard’s Hot 100 chart in December 2019 – becoming Mariah Carey’s 19th number-one single and her first since 2008 when she topped with “Touch My Body”. This success was also replicated in 2020 as it returned to its peak position again that year, making it only the second song ever (after The Chipmunk Song by David Seville) to achieve the record of leading the Hot 100 in the holiday hit section for the longest time.

In Canada, this festive tune has been soaring up charts every wintertime without fail since 1999, thanks to its digital downloads which made their way into playlists everywhere across North America throughout decades following its initial release proving once again no matter what music streaming platform we are using today; Mariah’s timeless classic continues captivating audiences all around, each holiday season like clockwork.

“All I Want for Christmas Is You” is especially popular in the United Kingdom, where it has been certified Platinum three times. With total sales reaching 4.2 million copies and counting, according to official British Phonographic Industry (BPI) records as of 2021, making a true staple during wintertime there.

In addition, this song also continues being streamed all over Europe even after more than two and a half decades since first gracing us with her beautiful masterpiece back then on October 29th, 1994.

From the moment this single was released back in 1994, it has been praised for being one of those timeless tracks which stands out from all other holiday songs thanks mostly due emotive lyrics combined with an upbeat melody. It may have taken 27 years, but one thing is certain about “All I Want For Christmas Is You” song: it remains just as relevant as it was two and half decades ago.

The song is much more than just a holiday classic; it has become an international pop culture phenomenon impacting millions worldwide still several decades after having seen daylight. Therefore “All I Want For Christmas Is You” by Mariah Carey will always remain one of the greatest festive tunes ever recorded – reminding us why love truly is all we need during these colder months.